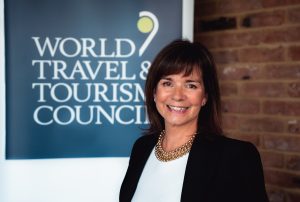 Over the years our show fans have heard us routinely connect with David Scowsill and then Gloria Guevara Manzo when they headed-up the World Travel & Tourism Council.  Change came to the WTTC back in August 2021, when Julia Simpson took on the CEO role with the organization after a successful career with British Airways and other leading world airlines.

With Liz Truss taking the reigns as Britain’s new Prime Minister on September 6th, along with the passing of Queen Elizabeth II at 96 on September 8th — and her historic Memorial Service occurring on September 19th, there’s certainly a lot happening in London making it the epicenter of the world once again.  In many ways, the World of Travel is front and center during these happenings, so we decided it was a good time to check-in with Julia Simpson in London again to get a first-hand report on her city and talk Great Britain and World Travel.  During our conversation we also discussed the continued rebound in travel from the pandemic, plus the downward spiral of the British Pound, Euro, Yen and other currencies against the U.S. Dollar — making travel more affordable for Americans, but far more costly for the rest of the world and what that means for the future.

To hear our full conversation that discussed this and more during our September 17th live broadcast of America’s #1 Travel Radio Show, that aired across our national network of now 495+ weekly affiliates linked with RMWorldTravel with Robert & Mary Carey and Rudy Maxa as part of our “Chief Travel Leader” conversation, simply click on the play arrow immediately following this text…

________________________________
The pandemic has had such a major impact on the world of travel, reducing its global economics by nearly 50% — a concerning total to us all!  As the calendar will soon turn to a new year, and with a look towards the future — we thought it was time to connect with Julia to hear straight from her about some of the things the WTTC is doing to help and support the numerous sectors of the travel industry — along with current news, trends and data that they’re seeing as we approach 2022 and beyond.

To hear the full interview that aired across our national network of now 480+ weekly affiliates aligned with RMWorldTravel with Robert & Mary Carey and Rudy Maxa, during the live broadcast of America’s #1 Travel Radio Show on 6 November 2021 as part of our “Chief Travel Leader” series — simply click on the play arrow that follows this text.