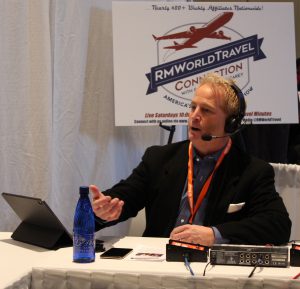 From his regular appearances on Fox News Channel for ‘Fox & Friends’ and the Fox Business Network, to other daytime Talk TV programs, Kurt Knutsson is best known as “Kurt The Cyber Guy.”  He’s one of the most trusted sources for expert insight and analysis on all-things tech.  Splitting his time between New York and Los Angeles, he’s also a seasoned traveler.

Kurt was back on the 6 April 2019 live broadcast of RMWorldTravel with Robert & Mary Carey and Rudy Maxa to report on the dangers on a plane when your phone slips into the crevices of your seat — and either you or your seat mate reclines cracking the phone and damaging the lithium battery.  You can hear the full interview using this link —

Did you know the electronic entry door locks found at many hotels are a new favorite of criminals seeking to steal from you or worse?  On our 16 March 2019 live broadcast of RMWorldTravel with Robert & Mary Carey and Rudy Maxa, Show Friend Kurt Knutsson returned with the details and ways to safeguard yourself the next time your travel and stay at a hotel.  The eye-opening interview can be heard again now in it’s entirety by clicking on the play button arrow below …

During the 26 January 2019 live broadcast of RMWorldTravel with Robert & Mary Carey and Rudy Maxa, Show Friend Kurt Knutsson joined the program from the Javits Center to talk travel tech and share some of his observations from the recently completed Consumer Electronics Show (CES) in Las Vegas, as the ‘Travel Trio’ were on-site at The New York Times Travel Show.  Kurt also joined Robert, Mary and Rudy as a panel guest for the top General Session event they hosted later that day as well.  You can hear their radio discussion from this date that’s now archived by simply clicking on the play arrow that immediately follows this text.

On our 28 July 2018 broadcast, Kurt joined us during the Hour 1 Show Open to discuss Best/Worst Airport WiFi.

On our 5 May 2018 broadcast, Kurt shared ways to find cheaper airfare and talked outdoor travel.

On our 19 August 2017 broadcast, Kurt shared 3 helpful travel websites to save you money when flying.

On our 4 March 2017 program Kurt joined us to talk cyber-security tips to keep safe while traveling, and Wifi protection.