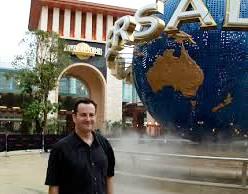 Show Friend Robert Niles was back for our live national broadcast of America’s #1 Travel Radio Show on 23 March 2019.  During our wide-ranging discussion, we discussed the new Star Wars sections of Disneyland and Disney World set to open this summer, Mall of America’s Nickelodeon Universe, the Yukon Striker set to open at Canada’s Wonderland theme park, Six Flags and Universal’s plans for their new Orlando park.   You can hear the full interview that aired across our network here —

On our 8 September 18 live national broadcast of RMWorldTravel, Show Friend Robert Niles returned to the program to discuss the mixed results of Disney’s Toy Story Land, as well as what to expect from their Star Wars Land in both Orlando and Anaheim in 2019.   We also discussed Canada’s Wonderland Amusement Park — and their 17th roller coaster set to become the world’s leader, plus got his thoughts on Warner Bros. World in Abu Dhabi …

You can hear the radio interview via this special player link —