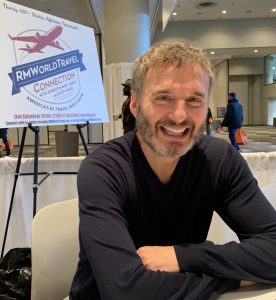 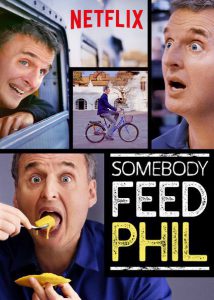 Phil Rosenthal is the creator and Executive Producer of the hit CBS-TV series, “Everybody Loves Raymond.”  But in addition to his work as a writer, actor and producer — he’s hosted the PBS-TV travel series, “I’ll Have What Phil’s Having,” and now he’s back with a new Netflix TV series, “Somebody Feed Phil.”

You never know who you’ll encounter on live remote broadcasts, and on 26 January 2019, as Robert, Mary and Rudy were broadcasting RMWorldTravel live from The New York  Times Travel Show, prior to hosting the top General Session event, Show Friend Phil Rosenthal was making his way around the Javits Center and joined the ‘Travel Trio’ for some fun and to talk travel, food, PhilRosenthalWorld.com and more.  If you missed the live interview, or want to catch it again now or anytime, you can access it via our archives by clicking on the play arrow below this text.

As our attention turned towards Thanksgiving, it seemed to be a good time to check-in with Phil again, and on our 17 November 2018 live broadcast of RMWorldTravel, we reconnected with Phil to talk food, the power of travel and some other topics surrounding Season 3 of his Netflix series “Somebody Feed Phil.”  To hear an archive of the interview, click the play button immediately below this text.

On our 24 February 2018 live broadcast, Phil returned to America’s #1 Travel Radio Show, to discuss some travel fun, good food and a few of the places he’s visited for “Somebody Feed Phil” including Bangkok, Vietnam, New Orleans and Lisbon.  You can hear this latest interview by clicking on the play button below …

Phil first joined Robert & Mary to discuss his travel experiences for “I’ll Have What Phil’s Having” in Italy, France and elsewhere back on 21 May 2016, and you can hear that interview by clicking on the play button below, or accessing our full show via the archived podcasts link on this website …