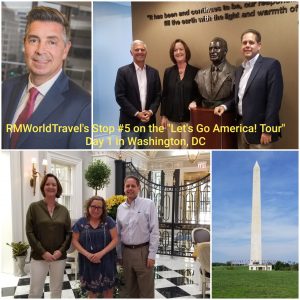 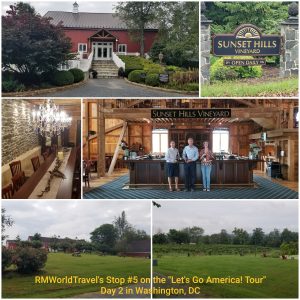 Stop #5 on RMWorldTravel’s special “Let’s Go America! Tour” brought us to Washington, DC and the Four Seasons Hotel on September 11th 2021.  Respective of the day, it was important to us to strike the right balance and tone that reflected the past, present and future.  That’s why as part of our live remote broadcast of America’s #1 Travel Radio Show, we worked through the proper government channels to receive access to the Pentagon as a way to commemorate the 20th Anniversary at the National 9-11 Memorial.

The momentum we’re seeing and feeling at each stop on RMWorldTravel’s “Let’s Go America! Tour” is wonderful, and it’s all part of us working to do our part to invest in the industry that we love and help get people more comfortable being back out there with their own travels in meaningful ways — while promoting safe, responsible and engaging travel.  The quality of our broadcasts, married with the richness and diversity of the show content consistently delivers compelling radio that is connecting with so many show fans across the country — keeping them coming back for more!

For a quick .pdf recap of the live broadcast, photos & some social media posts/listener comments – CLICK THIS LINK!

We kicked off the national tour back in May at the Greenbrier Resort in West Virginia as Stop #1, then it was Newport RI for Stop #2 in June — the all-new Legoland New York / Orange County NY was Stop #3 in July, Chicago was Stop #4 that included celebrating the 150th Anniversary of the Palmer House in August, and then we moved on to Washington, DC for Stop #5 in September.

To hear the live broadcast of RMWorldTravel with Robert & Mary Carey and Rudy Maxa from Washington DC and the Four Seasons Hotel, that ran across our network of now 480+ weekly radio affiliates, simply click on the respective Hour immediately below this text and enjoy!